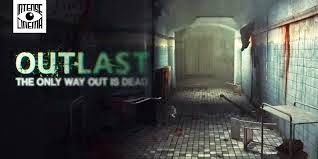 While everyone's opinion on what makes a game scary and tense will naturally vary, in my experience this has to be the scariest game I've ever played.  The mixture of vulnerability in the protagonist - highlighted by little touches like seeing his hands and hearing his whimpers - combines with events that feel unscripted and a seemingly randomised enemy pathing system, made the whole thing very intense.

Since I love horror games I thought I'd let it stew in my head awhile before discussing it which is why it has taken me so long to get to this point.

The game has a pretty simple premise.  Miles Upshur is a freelance investigative journalist who heads over to Mount Massive Asylum in Lake County, Colorado, due to an anonymous tip off from someone calling themselves the Whistleblower.  After finding his way inside, he gets a glimpse of the devastation and is soon eager to get out again.   Driven by the hope of unlocking the electronic EXIT doors, Miles must make his way through the asylum, hiding from the tortured inmates and piecing together the truth behind the asylum while trying to hold together the shreds of his sanity.

The game has some pretty simple mechanics.  You can clamber over low obstacles (i.e. desks), squeeze through narrow gaps (i.e. barricades), run away, shut doors, open drawers, climb ladders, hide under beds or tables, sneak into lockers, slither along ledges, and hoist oneself up into large ventilation ducts.  The only other action you can directly control is whether you rely on your own vision or use your night vision camera that lets you see in the darkness but which drains your batteries.

I list it all out because it points out one of the main difficulties between translating any movement-oriented stealth game and that's the little detail of timing.  It's tense running through a corridor only a few steps ahead from the bad guy and anxiously leaping up toward a vent.  It's nerve-wracking when you crouch beside an open door, wondering whether you should walk out into the darkness or not.

Making a series of dice rolls that all use the same Athletics or Stealth skill is not tense.  So we can't rely on that.

So here's how I would do it.  I would run this game with a single player.  If I had a number of willing players, I would just run the game several times and then have a chill out session where people could discuss their favourite moments.

I would also keep reinforcing the light rather than the darkness and shadows.  It's generally easy to remember what is well-lit and seen than what is unseen so by trying to force myself to think in terms of the unseen or hidden areas, I'd find it easier to remember that some parts of the room can't be seen without a camera.  Naturally light should be more restricted in reality ... the dark should be darker.  One lamp won't cast enough ambient light throughout a large room to provide much to go by.  How else can the PC sneak through and survive?

Naturally I'd use some kind of timer to represent battery power so that the player has a key decision to make - will they use the night vision camera or rely primarily on their sense of hearing?  Yes, batteries last for several hours or more in the real world but perhaps some supernatural aura drains the batteries in this place?

I also wouldn't pause the timer for descriptions.  Yes, I might take 15 seconds on a description, a full minute when answering questions, but it also takes longer for the PC to creep across a room than "I crouch-walk to the door".  Such a rule would also mean that we'd both have to keep things short, snappy and to the point.  If you're a chatty and verbiose GM, use this as a reminder to keep your own descriptions short and tense.  Any lengthy description will make the player cranky as you're eating into their battery time.

I would allow the player to use the environment to their best advantage but I wouldn't encourage it (unless they're a tactician type, in which case, welcome to how the game will need to run).  Why can't they make a barricade of their own?  Yes, there'll be noise and it won't last forever but it could work out if used in the right situation.  If I'm dumb enough to include a hammer, I'll just restrict the nails.

Definitely do some prep-work on this.  You'll want a map (that you never show them), an idea of what the unchangeable boundaries are (can they break any of the windows?) and some idea of whereabouts the various threats are so that the players believe that the consequences are affected by their decisions and not simply GM whim.

On the other hand, don't include a running list of all usable equipment in every room.  Just give a broad description of the room and let the PC decide what to do.  They can ask if there's a hammer in that tool shed.  You can decide on the fly if it would work best to do so.  You *don't* want to slow things down to painfully peruse a list.

I'd avoid any form of combat stat.  The player should build a PC who wouldn't fight.  Just as you don't bring a pacifist into a D&D dungeon crawl, so should you not play a brawler in this one.  After all, the only reason why Miles survived for as long as he did was because he didn't fight everyone.  The enemies outnumber you.  Even if you only take one punch per bad guy (unlikely), you will eventually get a concussion and die.

You might want to include a few chips they can use on action scenes whenever they like that they can spend to get a room-length away from a bad guy or out of reach.  This could be used for those moments  like when Miles is creeping across a ledge in front of a prison cell and is grabbed by a patient before pulling loose.

Finally you should avoid making many rolls in general even though you might have a stealth or movement stat.  While combat rolls imply some form of decision making (all-out attack, dodge, move, types of blows which all have their own modifiers), movement and stealth stats are normally a single entity which is re-rolled over and over.  There's no decision to make in those instances.

Therefore rely on decisions.  Left or right?  Up or down?  Under the table or in the locker?  Then you should make a roll to see where the bad guy checks.  If you use 1d6 you could increase the odds of being discovered depending on whether they've been spotted by that bad guy in a similar hiding place before, if the bad guy is more thorough or if the hiding place is closest to the door.  Once discovered, the PC should have a chance to run.

The main running mechanic could depend on player memory.  Remind your player at the start of the game that human memory becomes very unreliable during high stress situations so they won't get to pick their way via a map while they are running in terror for their very life.  Instead you'll throw out descriptions of what they can see as they're running and they need to choose.  Left or right?  Up or down?  Pass the room with the bookcases or enter?

The PC's health also shouldn't be worn down with randomised damage.  Each enemy should deal a precise amount of damage (1, 2 and 3).  The PC could then have 3 health points and three "lives".  Once they lose one set of health points, something terrible happens to them that they later escape and they then return to the action with another 3 health points and one life less.  Check your players boundaries before you decide on the "something terrible".  In some cases your PC might be able to deal with generalised torture, others are happy with amputation or even (in very rare cases) sexual assault.  Once the third life is "taken", it's game over.  The player doesn't get to see the ending.

Anyway, a campaign based around Outlast or including elements of it, should appeal to -

Explorers who love the horror genre will be the ideal candidates for this type of thing as they will poke into each and every room even when the safest path is directly from Point A to Point B.  They may even trigger events simply to see what will happen.  They're generally harder to scare but can help create truly terrifying tales.

Communicators will find the non-sadistic patients to be interesting figures and will want to have the chance to talk to them.  If they really enjoy horror, you can get a lot of mileage out of this.

Action Heroes will hate it.  Yes, there's room for adrenaline junkies but there's no opportunities for awesome moments.  The most Miles ever does is push someone away from him.  That's hardly an epic chance to shine for your average Action Hero.

Tacticians will potentially enjoy it but will likely feel the confines of the genre to be too confining.  They will want to find ways to crush enemy patients, lock them in rooms or otherwise neutralise them as threats.  They could make an interesting solo player but expect to be more flexible with them lest they grow frustrated.

Investigators would enjoy the slow discovery but they will want plenty of clues and handouts.  If you haven't read any Trail of Cthulhu or Call of Cthulhu BRP adventures, I'd recommend doing so first.  Give them actual physical representations of what they find to keep them keen.

If you want to see the list of games I've done thus far, you can find the Game Translation series starter over here.
Posted by Shannon at 11:54 AM

Shannon
An amateur writer, psychology graduate, and well-meaning voyeur into the world around me.